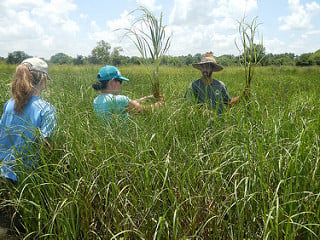 Although the weather was very hot and humid, our group was excited about the outcome of our work. The first job was transferring potted trees onto a new surface in order to avoid sprouting weeds. Later in the week, we will be planting the trees from the nursery in the wetlands. For the second task, we shoveled dirt into wheelbarrows and carried it over to the other side of the pond. By doing this, we made the ground higher so that when rain fell it would flow into the pond. Finally, we pulled weeds out from the bottom of the unfilled pond. At first, we thought our work would not be beneficial. However, after hearing more about how our work would be helping the wetlands, we began to understand and appreciate it more. We also saw an IMAX movie on Hurricane Katrina that exhibited the personal feelings of people affected by the disaster. And to carry on the theme of hurricane experiences, we were also told a story from a man who the locals in the Lower Ninth Ward named, Mr. Smith, or as his friends call him, Smitty. His life was strongly affected by Katrina. He talked about not wanting to leave his home, but if things became really bad he would have to. Well, as we can all guess, he ended up evacuating. He told his story of being displaced for months. Initially, after being “rescued” by boat he found himself dropped off on higher ground only to spend the next several nights under the moon with little food or water. It was powerful to say the least. I think that many of us have a new understanding of the hurricane after hearing this personal experience.

In only two weeks we have had to say many goodbyes. Some of the people we met were only in our lives for a few days, or a few hours, and most we will never see again, yet each one has left an impact on us. Having to say goodbye made me focus on what...

Today was a relaxing day in Panama! We had a beach day that started off with a 45 minute boat ride followed with snorkeling adventure. While in the water, I noticed that the ground I was standing on was all dead coral. This made me realize the dangerous condition our oceans are in. We relocated...

Students had the chance to meet with and work alongside the Executive Director of Give and Surf, Neil Christiansen. Look out for more student posts coming this week and follow along with our pictures and video each day on Instagram @studentsshouldertoshoulder