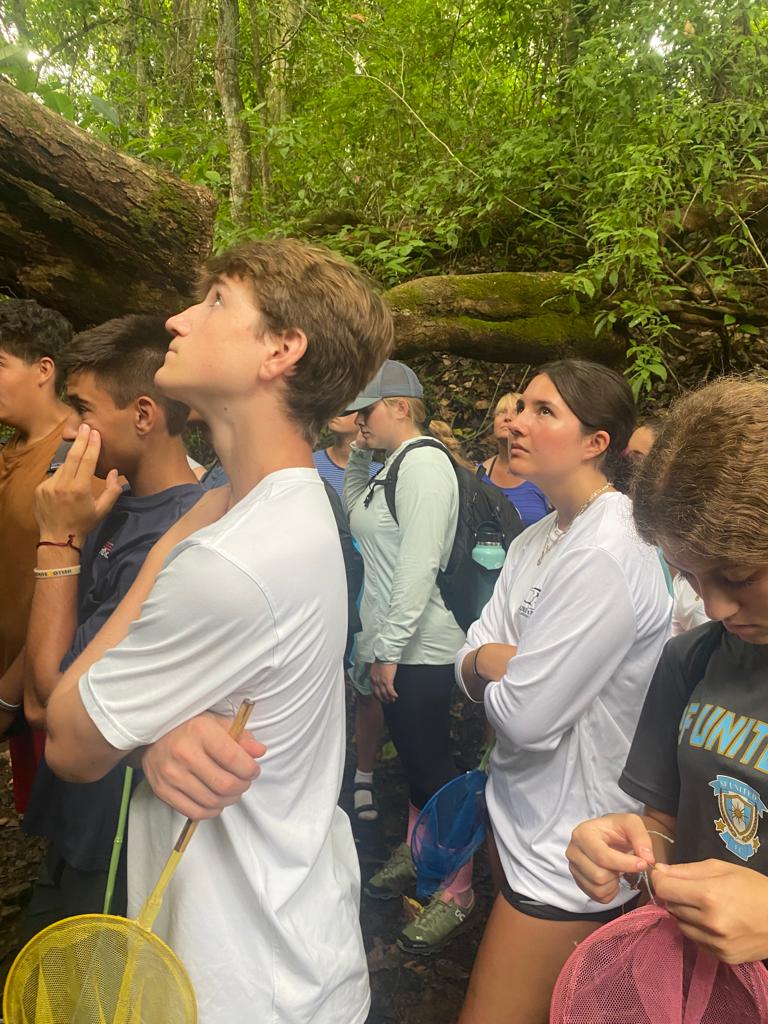 Today we woke up around 7:30, which is our usual time when we get up. Breakfast was served at 8am. We had toast, eggs and watermelon. It was very delicious, especially the toast. After we all ate, we cleaned all of the plates and got ready for the day. Today I was very excited for what we had planned because it was a change from what we normally are doing. We went to go see Jungle Mike, he studies insects for a living.

He talked to us about his fear of bugs before he got into studying them. It was very interesting learning about his life. He then showed us a board with a bunch of different butterflies on it. He knew all of their names and facts about them. He is a very smart man. Then, after talking to us, he gave us a tour of his butterfly farm. We were given nets to catch butterflies and I was determined to get one. I thought I was hurting them so I felt bad, but Jungle Mike said they are ok. It was so cool how fast he could name each type of butterfly. After we walked around we went more into the jungle and saw the most beautiful blue butterfly, the name of which escapes me. As we were walking, we had to climb on this log with a rope, and I was just praying that I would not slip. Thankfully, I made it to the other side. After our tour, he gave us samples of honey to try. I also forgot to mention that he gave everyone termites to eat, but obviously I was not about to eat an alive bug. Everyone that tried it said it tasted like nuts. Now back to the honey… (which I did try) It was very good! He gave us a few other things to try, like honey with apple cider vinegar, and coconut oil lotion. After that, the last thing we did was check out a tree that had bats living in it. Sadly, I forgot the name of the tree. I learned a lot today about insects. After, we rode the bus back and had a chill afternoon. Now we are about to eat dinner and go out for the turtle patrols. Crossing my fingers that we see a turtle!

Thoughts on the Source of Food

Summary by Kevin and Alondra based on group reflection… Today was all about food!  This community lives and eats in ways that are closely tied to the local environment. Most of the foods that we have eaten have come from the area.  We began the day with a visit to a small dairy very close...

Up In The Hill

Today we started off with a very adventurous morning that consisted of a jungle hike to Up In The Hill. We learned a lot of interesting facts about Javier and Jeanettes farm including that bamboo grows about 1 foot a day and that pineapple grows in bushes! After learning about how the owners created their...

All of the SStS girls and I would agree that the relationships that we have formed with the Hope Girls over the past fourteen days have really taken us by surprise. Fourteen days does not sound like a long time, but when we had our closing ceremony yesterday there was not a dry eye in...