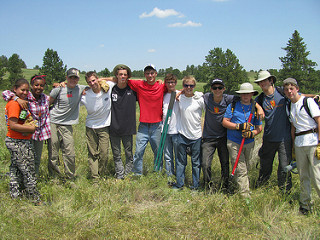 Yesterday we built tipis for a Lakota children’s camp. We built the first few tipis, and it was fairly simple after understanding the ways to construct one.

The tipis have so much symbolism for the Lakota people. The tripod (the foundation of the tipi) represents the morning, evening, and north stars. The remaining seven poles represent the seven Lakota laws. While wrapping the poles together, you wrap each pole four times which represents the four stages in life and the four seasons of the year. The poles also represent the men of the Lakota nation, the cloth represents the women, and the stakes that hold the tipi together represent the children. Traditionally, the tipis were constructed by the women of the tribe, because the home belonged to them, and they cared for it.

After we set up the first five, we realized we still had five more to go, but the group was tired from the labor, heat, and lengthy work day.    Even though we were tired, we had to finish the tipis so the children at the camp would have a place to sleep that night. We pushed forward, worked together, and finished the tipis.

The Lakota are also tenacious within their traditions. Over the years the Lakota have been colonized and forced to practice other beliefs than their own. But despite colonization, they continue to practice their Lakota traditions by instilling in their youth the importance of the Lakota people.

Tashidale everyone! That’s Sherpa for greetings! I am so glad I have another opportunity to post a blog today. I want to share with everyone how much progress we have made and what we have been doing for the community here in Salleri. We are building the first women’s hostel here in the Everest region...

Welcome to the Nepal Travel Journal

[vc_row][vc_column][vc_column_text letter_spacing=””]The travel journal will be the place for students to share their experience while traveling. Once the students are on-site, they are asked to post reflections, observations, pictures, stories, poems, and more. Our whole community appreciates the opportunity to be part of the group’s adventure, and as the course comes to an end, each...