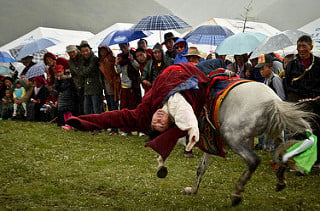 On the second day of the horse festival I began to play with the kids from the orphanage. I would run up and down the side of the hill, chasing the children to try to tickle them. After only ten minutes it seemed like we had known each other for quite some time. They would run after me too, and not only tickle me but also tackle me. I would fall and roll in the wet, somewhat muddy grass, while being attacked by a pack of 15 little boys. We all could not stop laughing so we kept this game going for almost an hour. Shortly after, one of the boys let me know that he wanted to go down to the valley and play soccer with the older kids, he held my hand and motioned to run down the hill with him to go play. At this, the children and I held hands and ran as fast as we could feeling the cool breeze through our bodies to meet the others in the valley. While I was running I instantly knew that the relationships I would form with these kids in the next few days would be truly remarkable and would change me in so many ways. ““ Renata

A Selection of Insects

The SStS Nursery and Building Teams: The building we are currently working on is going to be more lodging and meeting space at Tiriji, their eco-center that will be used for leadership conferences and other income generating services, including bio-intensive agricultural training. Another self-sustaining aspect of the KACH model is organic agriculture.  Today we prepared...