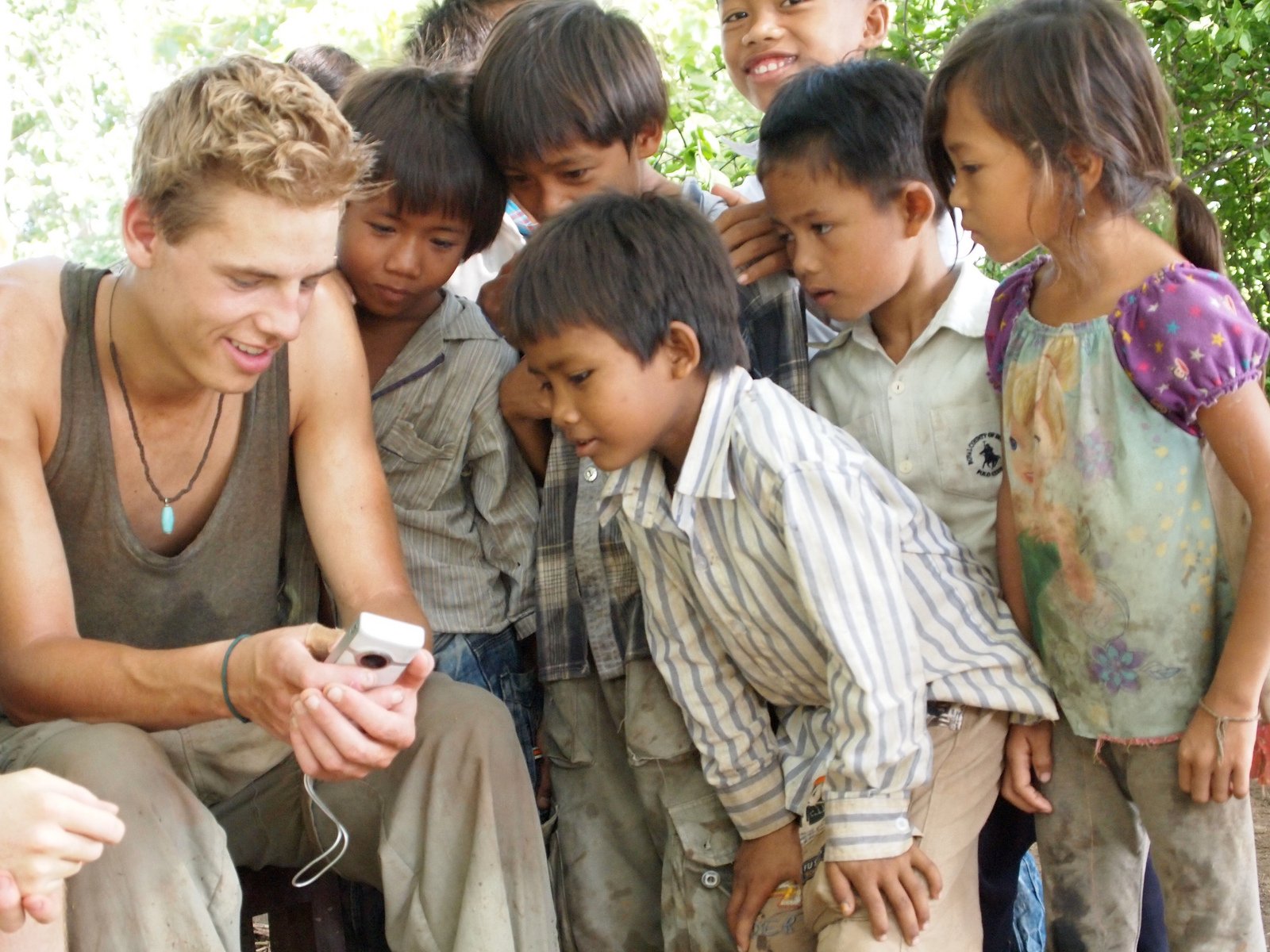 Greetings from Cambodia! Instead of all meeting for breakfast in the fish shack as usual, today we ate at our home stays and spent most of our last day on Koh Preah with our families. I don’t know about all of the others, but when Catlin and I awoke to find noodles for breakfast instead of rice, we squealed with joy and wolfed down the whole bowl. After breakfast we all continued to spend the morning with our home stay families, beginning to pack up our bags and preparing food that we would later offer to the monks.
At 9 we all headed to the island’s pagoda dressed in our appropriate ankle length skirts (for the girls) and nicer dress for the boys as well. The pagoda was absolutely stunning with its large Buddha statue and colorfully painted walls that tell the traditional Buddhist stories. We toured around for a bit and then went to another structure to offer the monks their food. The pagoda’s priest began by leading a chant and all of the Buddhist nuns followed along, even continuing in unison when he priest stopped. After much chanting the monks finally entered, and except for one 77 year old monk, the rest were 15-16 year old boys. More chanting ensued until we finally offered the monks the food, having to bow 3 times before and after handing them the plate. I never knew before that monks only eat 2 times a day, and can only eat when they are offered food. When the monks were finished with lunch, the oldest monk began the blessing. We all sat on the wooden steps expecting to be doused with a little bit of water, but instead we were drenched with water thrown from behind. By the time the blessing was over, we were all soaked, but it was a cool experience to be blessed by a monk.
We returned to our respective home stays for lunch, and then all the kids got “Cambodian Starbucks” and met at the fish shack to work on our lens assignments. We were there for much of the afternoon, even through yet another spontaneous rainstorm. Before we knew it, it was time for our closing ceremony party. Our home stay families and the workers from the site were all at the celebration, so we all got to spend some final quality time together before leaving.
The sunset that night was beautiful, and there was even a double rainbow to top it all off. Following dinner, the real party began. There were games including a watermelon eating contest, a water/dancing contest, and musical chairs. We were victorious for nearly every competition, only losing the watermelon contest. After dinner, the locals (especially Tuon, Monkey Man from the worksite, named for an excursion down the 8 foot deep yet unused sewer hole to retrieve his chisel) began to bust out a few moves. We were able to follow along thanks to our traditional dancing lessons earlier in the week, and we even got the islanders to join us in a more American style of dance.
Unfortunately the party had to end and it was really hard to say goodbye to all of the families and workers who we had come to know so well throughout the week. It was a challenging but completely rewarding week in Koh Preah, and I’m sure that we will all never forget the experience.

More From Past Programs

It's the Small Things that Count

Detroit impacted me in multiple ways, both in physically and mentally. The biggest way I was impacted was probably, how my appreciation of everything changed. And when I say everything, I mean everything especially the little things in life we don’t notice and perhaps even take for granted. For example, I have the luxury of...

Before I get started reflecting on the SStS: Detroit course, I want to take this opportunity to look back at what we, the students and instructors, accomplished. What did we really achieve while we were in Detroit? I know we are asked to talk about this and present these findings to our schools and communities...

Joy in the Present

Today we spent most of our day back at the school mixing cement and creating more pillars. In comparison to yesterday, we are twice as efficient at post making which was really awesome. During one of our breaks we listened to one of the main work managers play a traditional Cambodian song using a leaf...