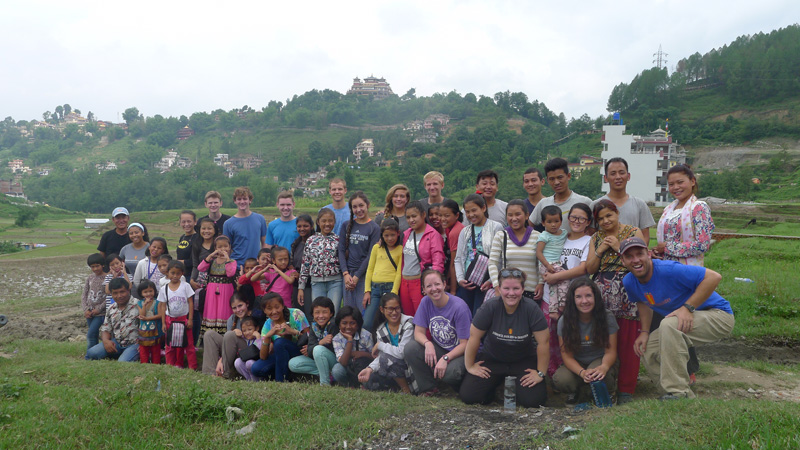 Editor’s note:  This insightful and refreshing reflection was somehow “misplace” in technology.  As you read, you’ll understand that its quality makes up for its late post.

Even though we only spent a day at Namo Buddha, what I experienced in that short amount of time was different from anything I have ever seen. When we first arrived exhausted from four days of trekking, The site of the guesthouse seemed like the happiest moment of our lives. We could finally take a nice shower and sleep without the paranoia of leeches and bugs creeping into our beds at night. After getting settled a couple of monks took us on a tour of the monastery. We saw three secret spots of the Buddha, a solitary reflection house (where monks stay for a year without leaving), statues of Buddha, and thousands of prayer flags. Later that night, we were lucky enough to attend the monks’ luna ceremony. In the Puja, the monks played gongs and trumpets while the other monks recited prayers, and sat silently in reflection. During our stay at Namo Buddha, we shared dinner and breakfast with over 300 monks. Their strict schedule demands that they finish their food in around 10 minutes without wasting a crumb, and by the time they finished our group was only about halfway done. In fact, the monks’ schedule is so demanding that they were barely able to play soccer with us. Sonam had to make a deal with them that in exchange for playing with us for an hour, we would work on their project for a new playground for the same amount of time. When it was time to return to Kathmandu, we were all blown away by the work ethic and dedication of the monks and the beautiful architecture of the statues and the monastery itself. I for one am grateful for the outstanding cultural and learning experience that I had at Namo Buddha.

"But Isn't That How Life Works?"

Part One For the past week, we have been fortunate enough to have a well-trained yogi teach us yoga. Although his teachings are more Buddhist-related, the messages learned can apply to anyone willing to open their hearts. For example, he told the group that some people meditate for up to 50 years and still have...

The night we left the Himalayan Hope Home will forever be one of the most memorable moments of the trip. The girls of the Hope Home had put on a ceremony for the SStS group, which eventually led to an emotional good-bye. Many tears were shed and many hugs were shared as we said good...

Traveling with a group of people that one may not know is very daunting, especially when we meet to go to the other side of the world. When we first arrived at the airport we played a couple of card games while we waited for the whole group. After everyone made it and finally made...