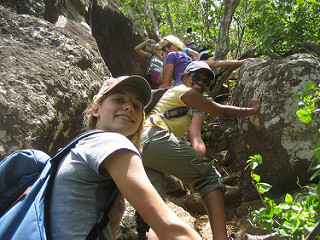 We started the day planning our lens presentations with our partners, but that was not the true highlight of the day. I know, you can barely believe that, but it’s true. The truly great part of the day came when we headed down to Playa Amarilla to meet up with the Jovenes for our final day of bonding with the teens of Playa Gigante. It was supposed to start at 3:00 but Nicaraguans, much like my fellow Zimbabweans, run on their own time and things didn’t get truly started until half an hour or so later.

As far as relatively unstructured beach get togethers go, ours was pretty fantastic. It’s pretty hard to go wrong when you have the cool, beautiful Pacific Ocean stretched out in front of you. The temperature was cooler due to light rain in the morning, and the water temperature had dropped a little as well. We splashed around in the waves, body surfing and just enjoying the water in general. When the water became a little much we got out and decided to move things to dry land for a little bit. Let me tell you that the Spanish-English language barrier had never been more real than when we had to explain how to play capture the flag to the Youths. Ericka tried and most got a general idea but at some point, it turned into a lot of running with bandanas and a lot of bewildered staring (mostly from me, I was pretty lost, and I speak English). After that, we settled into some good old fÃºtbol which was a great way to pull things back together.

Despite the hilarious confusion, it was a pretty great afternoon full of pretty fragmented Spanish, even less English, some spontaneous dancing, off-key singing, frolicking and straight up bonding. It’s amazing how much bonding can be done simply by constantly smiling, trying and just doing your best to be present and in the moment. Mi amiga mejor in Playa Gigante, Dina, and I spend a lot of time just smiling, putting our arms around each others shoulders and laughing at my Spanish. The fact that I can make connections here despite all the differences is as absurd as it is amazing to me. Its crazy how well you can communicate through body language when you need to.

Today we went to the pasture to follow a buffalo hunt. Upon arrival, the young bull buffalo (tatonka) had been shot and field dressed, ready for processing. Before hunting the buffalo, the Lakota ask the buffalo to offer up a young male for the hunt. The grandmother (Unci) buffalo chooses the male, who is then...

Friday was our first day in Meru, and the warm sunshine and lush landscape were a nice change from bustling Nairobi. After a nice breakfast of oranges, bananas, pineapple, pancakes, and eggs, our group met with Dr. K to discuss how IPI began and why she decided to run her program the way she runs...

Everyday that we have been in Bocas Del Toro, two of my group members and I have spent an hour at a local restaurant in Cristobol teaching the moms who own the restaurant English. We spent our time teaching them common restaurant phrases such as what would you like to eat, my name is, and...