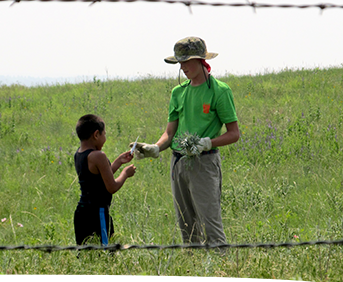 We began the afternoon by collecting bundles of wild sage, which was later used in a cleansing ceremony for Lakota youth who had suffered from trauma. After the children were cleansed, and the older men finished their inipi (the rite of purification), we entered the inipi for our own experience. The Unci (elder grandmother) opened the ceremony with a heartfelt address to our group from the Ate (the “great grandfather”), the spirit which guides the Lakota, in which she thanked us for the work we had done thus far. In that moment, we were truly shoulder-to-shoulder with the Lakota, and for a time we felt as though we were one with them as a member of their Oyate (nation). She thanked us for our work so far at Pine Ridge, however, at the same time we are endlessly appreciative of the generosity that the Unci and the rest of the Knife Chief Buffalo Nation has shown us.

Yesterday we built tipis for a Lakota children’s camp. We built the first few tipis, and it was fairly simple after understanding the ways to construct one.

The tipis have so much symbolism for the Lakota people. The tripod (the foundation of the tipi) represents the morning, evening, and north stars. The remaining seven poles represent the seven Lakota laws. While wrapping the poles together, you wrap each pole four times which represents the four stages in life and the four seasons of the year. The poles also represent the men of the Lakota nation, the cloth represents the women, and the stakes that hold the tipi together represent the children. Traditionally, the tipis were constructed by the women of the tribe, because the home belonged to them, and they cared for it.

After we set up the first five, we realized we still had five more to go, but the group was tired from the labor, heat, and lengthy work day.    Even though we were tired, we had to finish the tipis so the children at the camp would have a place to sleep that night. We pushed forward, worked together, and finished the tipis.

The Lakota are also tenacious within their traditions. Over the years the Lakota have been colonized and forced to practice other beliefs than their own. But despite colonization, they continue to practice their Lakota traditions by instilling in their youth the importance of the Lakota people.

A long time ago (perhaps a week), in a country far, far away, a group of students was settling into life at Munaychay Children’s Village outside of Urubamba, Peru. Teens and instructors alike were getting used to early mornings, local soups and dishes, and glacial showers. The children of Munaychay and students from the Northern...

As we look at the current progress we have made so far on the guesthouse, it is truly inspiring  seeing how one action can have a ripple effect. Working side-by-side, “shoulder to shoulder” with our fellow Kenyans has made my eyes open to the limitless possibilities when people of all backgrounds come together. No task...

We started the day planning our lens presentations with our partners, but that was not the true highlight of the day. I know, you can barely believe that, but it’s true. The truly great part of the day came when we headed down to Playa Amarilla to meet up with the Jovenes for our final...