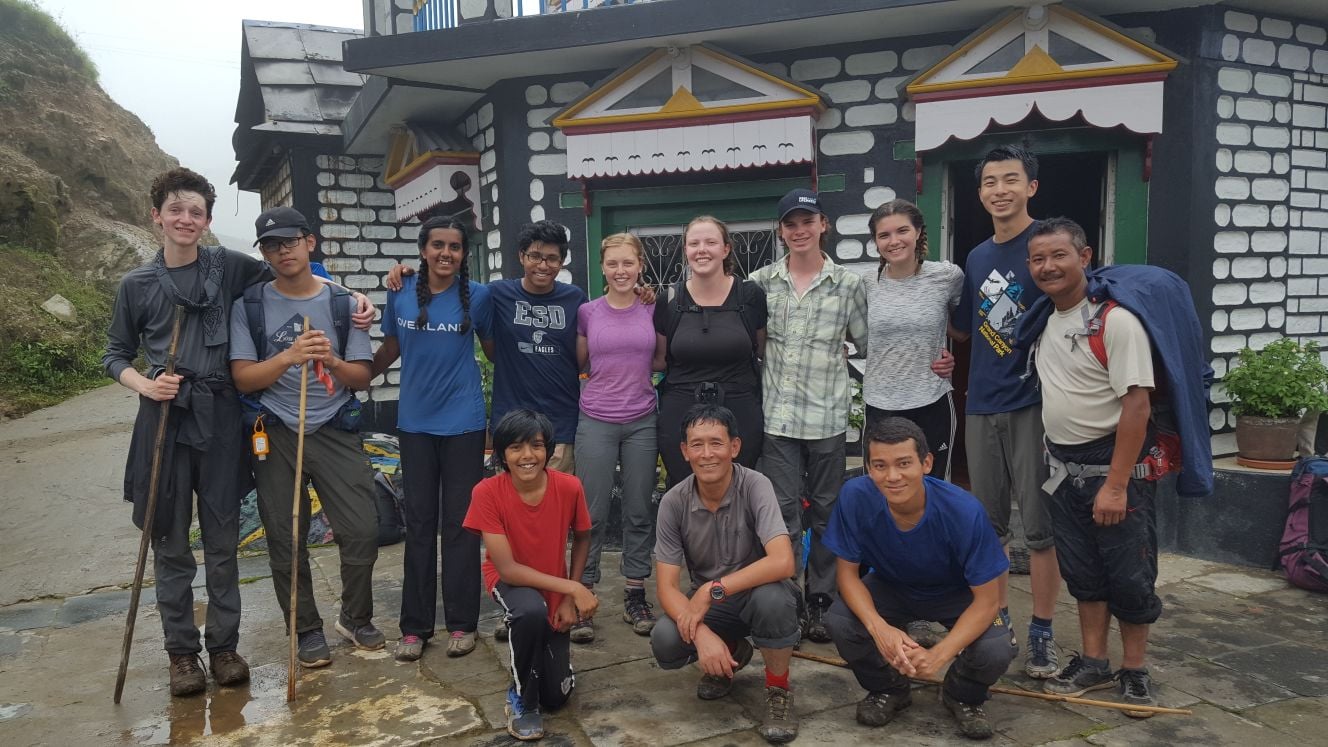 Waking up with the light was a new and interesting experience for me, with the added confusion of not knowing the time beckoning me to consider not waking up. After going downstairs (where it was clear that the sun had risen over cloudy Kathmandu), I noted that there was no one there but myself and a security guard for the Shechen Monastery next door. In broken Nepali, I asked where was the bathroom and what the time was. He answered in perfect English, “5:55am.” My jet-lagged brain took a minute to process, and it sank in that I had a while to rest. At 7:45am, I came down for breakfast where the rest of the group enjoyed the plethora of teas and had a wonderful breakfast. Today was about friends and discoveries. First thing in the morning, we ventured to the home of the primordial Buddha, Manjusri, who established the first great temple of Kathmandu, Swayambhu. The shapes and hills of Swayambhu were established with thousands of prayer flags, creating a mystical jungle with vines, transforming into colorful prayer flags and the trees morphing into stupas. When the primordial Buddha named the Kathmandu valley of the Naga Snake, he created a lush, fertile valley which now holds around 3.6 million Nepalis. From Manjusri’s honorific line of stupas, we journeyed through Kathmandu’s various dirt and concrete roads, marveling at the intensity of it all. All the while, we joked and laughed at Grayson’s remarks on squeezing a chicken. We stopped for lunch which was a savory platter of curries with rice and dal. Lunch was truly a bonding moment with Jackson’s laughs, Ellie’s jokes, Tarun’s with remarks, and Shane and Arwen’s burning tongues from a bite of a hot chili, made the whole meal a memory I will never forget. From there, we headed to the ancient Royal Square where the architecture was awe-inspiring and beautiful. From there, we headed back to the hotel to wind down a bit. Nick, Tarushi and I (with Nikki’s blessing) explored the Shechen Monastery’s corridors and marveled at the intricacy and beauty of the art. For dinner, we held a surprise birthday celebration for Tarun’s 15th birthday which was a perfect conclusion to the day!

Journey through the Pass

Wednesday – July 5th Our 17th day in Nepal started with a breakfast of potatoes with curry,and chick peas and poori (fried dough). It gave us much needed energy for our impending 9 hour trek. We left the village of Kinja around 8:30am and started our journey by crossing two suspension bridges situated above a...

[vc_row][vc_column][vc_column_text letter_spacing=””]It is the third day of homestay.  The day started with a well-prepared breakfast.  Acknowledging that we’re not used to the Napoli food, our homestay sister made us homemade fries for dinner last night and this morning’s breakfast.  We are very glad that our homestay sister speaks fluent English – no language barriers. Nikki brought...

From strangers to family

[vc_row][vc_column][vc_column_text letter_spacing=””]Today our group awoke back at the Shechen Guest House where we first started our trip in Nepal. Although the stay in this hotel is luxurious with hot showers and delicious food, it is also bitter sweet as it is the near end of our trip. Following a breakfast of pancakes and eggs, Shawn...