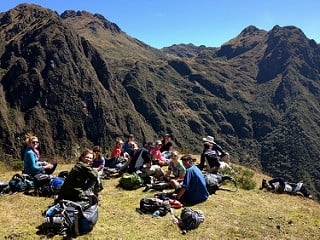 For those parents who are a bit worried about their babies being away in a foreign country, fear not, we are thriving in the glorious mountains of Peru in the little village of Munaychay. As we feasted upon a hearty breakfast of rolls with jam and butter and oatmeal with lots of milk, we struck up lively conversation about summer camp and while doing so we kind of lost track of time and then scurried around Casa 8 (the house we are staying in) to get ready for our work day. At 9 sharp we bounded down the hill to Santa Rosa and began to move rocks in an assembly line from the river to piles near the developing fish ponds. During this assembly line we were able to tone our biceps while completely tone-deafly singing songs (among such songs were songs by the great T Swift and Miley Cyrus).

Later on during one of our breaks Drake, Hunter and Lindsay went with Jakob (one of the German volunteers) to Urabamba to get cement for the ponds. While they were there the rest of us threw rocks from the opposite side of the river to the side closer to the ponds. I was very pleased to practice my softball pitch with small rocks (parents, I hear your gasps and do not worry there were no people on the side of the river that we were throwing rocks to). Later when the cement buyers got back we moved the bags from the truck into a pile. Now let us just take a hot second to recognize the great Katie Alonzo. Katie, as those of you have met her might know, is a fairly small person who carried bags of cement that weighted about as much as 85% of her body weight”¦yeah”¦it was pretty crazy.

Then after moving the cement we went back up the hill for lunch, and after that some people went down to work some more while others showered and did laundry. I was one of the people who went down to work after lunch, and we spent our time moving the rocks from one pile to another and leveling the ground in between the fish ponds. Around 4 we came back up to the house, changed our clothes, and then headed down to a lively soccer game with the boys from Casa 7 and Jakob. During the game some of us played with the children, picking flowers and running around, while others were busy trying not to get absolutely destroyed by the children of Munaychay at soccer. Finishing up our day we had an amazing pasta dinner made by the tias and then spent the rest of the night hanging out with each other.

So, my dearest parents/friends/readers I will leave you with a parting thought; as I was swinging my pick axe to break up the soil to level the ground, and feeling very much like Rosie the Riveter, I was struck with a great feeling of how lucky I am to be in Peru, working with great people, seeing amazing sights, meeting wonderful new people, and simply just swinging a pick axe.

We have only been here in Nepal for about a week and I have already made so many memories that I will cherish forever. While in Kathmandu we toured the Monkey temple and several stupas. We were all blown away by the amount of prayer flags that lined the temples. It has been amazing seeing...

So here we are, day 10, and so much has changed between the first few days in Playa Gigante and now. On our first day when we were assigned homestays, I was given a very limited amount of time to freak out about who and where I was going to be living with for the...