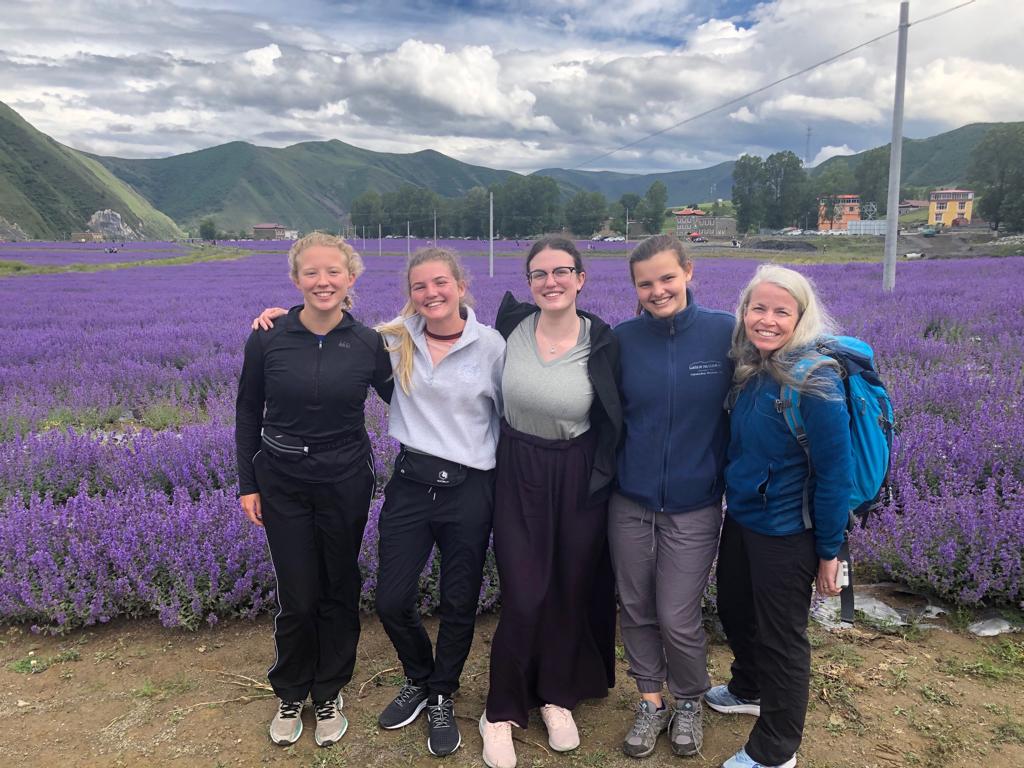 We awoke in Kangding this morning to a day that was colder than yesterday but far less rainy. The first order of business was breakfast: steamed buns, rice porridge, and hard-boiled eggs at a small restaurant near the hostel. From there, we set out to visit two monasteries in the mountains around Kangding. There Tenpa showed us around and told us about the customs and stories of Tibetan Buddhism. We visited prayer rooms of many sects of Buddhism. One of them had an enormous statue of Future Buddha. Because the belief is that when this world of humans ends, he will return when as another world of humans begins, he is depicted sitting in a way that he can ride quickly into action when the time comes. After lunch, we packed and headed for Tagong making two stops along the way. At first, we braved a steep cold set of stairs at about 13,500 ft. to get to the top of the mountain pass which was covered in prayer flags. Our second stop was at a lush field of lavender that stuck out handsomely against the mellow, mountainous landscape littered with yaks. When we arrived at our homestay, we were greeted with fresh yak milk yogurt, bread, cheese, and yak butter tea. We spent the evening talking with our homestay hosts and reviewing the curriculum with Kevin and Nikki. After a dinner of hearty noodle soup with vegetables and yak meat, we turned in for the night.

Our CI’s report that the group has made it to Kangding and will be leaving for Chengdu tomorrow. The group has had the chance to taste lots of local food, dance in the town center, and get a glimpse of nomadic life.

[vc_row][vc_column][vc_column_text letter_spacing=””] June 30 Luke Sloan Life is well in Tagong. The group started the day at 8 a..m when we were treated to a delightful breakfast of boiled eggs, yak butter tea, and traditional bread. Excitement filled the room when Tenpa revealed the blessing of Skippy peanut butter, practically gold amongst the group. After...

Update from the field

We have heard from our course instructor team that yesterday “the group began a hike at 13,000 feet and reached a hidden lake at 14,600 feet, with views of a peak nearing 25,000. The altitude was a challenge, but it was a great experience. Later, we visited a nomadic family of yak herders. Traveling to...