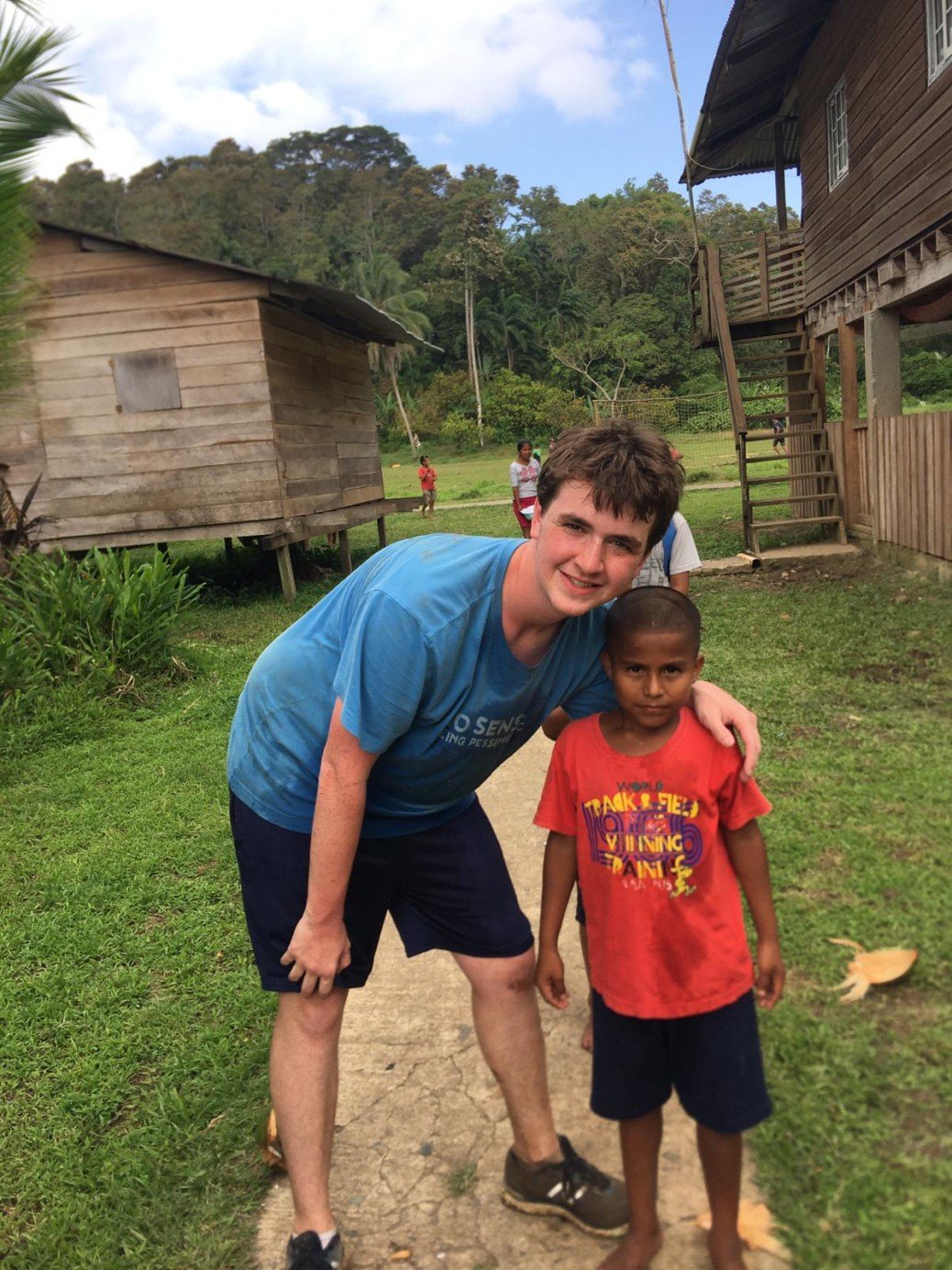 Going into this trip, I didn’t expect much. So what I got was unexpected.
The morning started the same as all the others. We were woken up by Mrs. Johnson, Bertrand gave a hilarious one-liner, I got my backpack for the day, and we’d all go down for breakfast. After a good meal, everyone got ready to get on the boat for San Cristobal. We were met by Taylor and his ever love-able dog, Oso. Once on the island, we went to a cocoa farm to see the grounds and watch a demonstration on how everything was made. The farm was breathtaking. Every part of it had a green tree to admire. There was a tree that had vines strong enough to support a person. Knowing this, I knew what I had to do. I got a hold of the rope and began to swing. Tarzan would have been jealous of my skills. Just call me Spider-Jim. The farm was great, but it couldn’t distract me from the fact that I was about to see all of the kids for the last time.
In only 5 days, I had grown very close to the kids. I had taught them so many cool tricks. There were two kids that I had the strongest bond with. Loren was a small boy in San Cristobal who loved for me to carry him around and spin him in circles until I was about to die. Angel was a sweet kid in Basti who had issues with a few of the other kids and I would have to calm down by taking him to play with legos. Today was the day that I would have to say goodbye.
In San Cristobal, I spent a good amount of time with Loren. I spun him around, played soccer, and made jokes. The best part was the coconut trees. I would reach up into the branches and bring down the sealed fruit. The kids would give them to me and I would smash them against the pavement to free the delicious treat. I held a coconut above my head and let the sweet water trickle into my mouth. I then ripped it in half and ate the tasty coconut meat. I would then smash more coconuts and give them to more of the kids.
Sadly, it came time for me to say goodbye to Loren. I told him that I had to go, he gave me a lackluster hug, and went back to the center. I walked to the docks feeling a bit sad that the goodbye had been so short and meaningless. Thankfully, Loren ended up walking to the docks. We said goodbye and I gave him a good hug. I waved goodbye as the boat headed out of the dock. The trip back was a good time to reflect on my time on the island.
Back on Basti, I found Angel and said goodbye. I gave him an old Batman t-shirt of mine to remember me by. He gave me a good hug and I said my goodbyes to the rest of the center. The group had dinner with Neil, the founder of Give and Surf. Like I said earlier, I wasn’t expecting much from this trip. What I got was friendship, knowledge, laughter, love, and the chance to help others. I think that is enough for me.